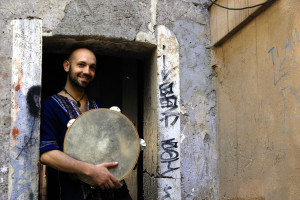 e always heard the beat inside of me.
Now I know that the rhythm is a part of me because it is the universe as a whole to be composed of rhythm. And so we, as a part of it.
My percussion research has always accompanied the research of my personal growth, and it, like this, is made ​​up of direct experiences and practice, rather than study. It will never end.
My teachers are: David Conte for the music of Salento, Fredy “el pulpo” Fernandez, in la Habama, for the Afro-Cuban culture, Jesus Alberto Fernandez, in Buenos Aires, for singing and vocal expression.
I have participated in several shows in different roles: musician, dancer, actor, clown, entertainer, wader, juggler. My most important experience is the one with the Argentine Murga (a culture of carnival in Buenos Aires which gathers people from the neighborhoods of the city in a colored show of rhythm, dance, songs and social criticism). In particular, I am honored to be the founder and the artistic director of Murga Patas Arriba, a musical-theatrical company with which we animated the streets of dozens of cities in Italy and Europe.
Writing, arranging and conducting a battery of drums give me the most satisfaction and make the people smile.
I have been working with: Murga Patas Arriba, Senzaterra, Le tre meno un quarto, Abraxa Theatre, Rome Precharija Orkestar, Compagnia Divano Occidentale Orientale, Melacanto y Melasòn, Compagnia Delle Palline.
Since I bought my first tammorra, I have gained experience in the traditions of Italian, Argentine, Afro-Cuban, Brazilian, Balkans, Uruguayan, Colombian, Arab folk music.
I like to do many different things and I’m trying to fill my life with things that I like, trying to feel good with myself and the people I meet during my life.